Get fresh music recommendations delivered to your inbox every Friday.
We've updated our Terms of Use. You can review the changes here.

by The Dread Crew of Oddwood 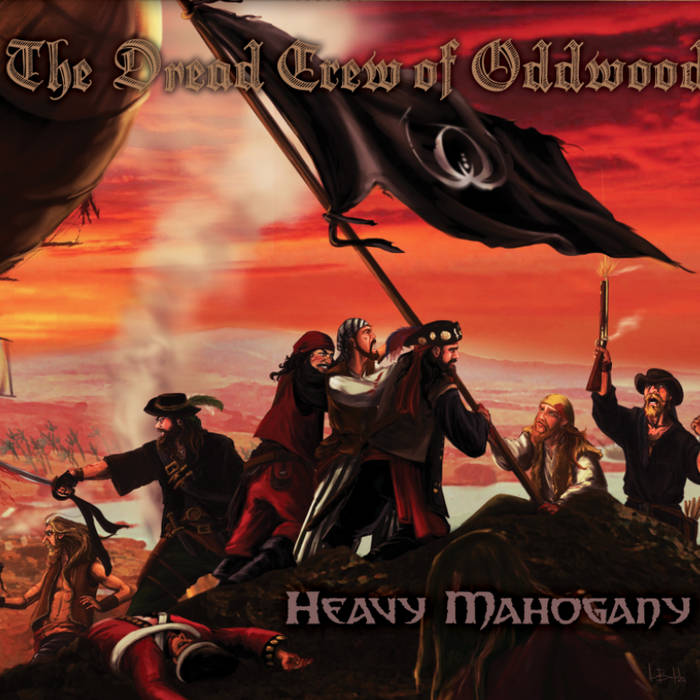 jessofrudolph A high adventure metal meets acoustic melody worthy of any piratical discography. The energy, passion, and playful self-awareness are all in this superb album. Favorite track: A Portsman's Reverie.

Arrogant Bastard Some jaunty local gents making rambunctious and raucous acoustic pirate shanties. I've seen them live many times, absolute animals and party people! Every song is a sexual pun or an aria to booze.
These balmy corsairs wield their heavy mahogany with the greatest of ease and thrust with impunity. Favorite track: When I Sail'd.

We last left our heroes of Oddwood amidst the company of an evil aquatic behemoth known only as “Rocktopus,” a true terror of the high seas. With its slimy, tentacled arms outstretched, it craves nothing more than to devour sailors’ flesh and perpetuate its own narcissistic legend. The crew members weigh their options, and after much debate, decide to sail around it. Insulted, Rocktopus pursues the vessel.

As the crew readies for battle against their gargantuan foe, they hear a cry from the East. A pterodactyl descends upon the deck and clasps down on Finwe Theodore. Hives erupt all over his body and he begins to sneeze wildly. “Oh no! Finwe is deathly allergic to pterodactyls!” shouts Riven. Captain Wolfbeard rushes over and grabs hold of his comrade to anchor him down, but his brute strength is no match for the pterosaur’s fierce claws, and Finwe is carried away.

Unnerved by the chaos, the crew unleashes tempestuous wrath on the salty demon before them, tearing it limb from limb and draining its life meter completely. As Rocktopus slides into its bloody, watery grave, it bursts into millions of pieces. The ravaged travellers gather their composure and calamari dinner from the deck floor, noticing a peculiar item amidst the debris—Rocktopus, in album form!

With the acquirement of this new, victorious disc, the party sets off in pursuit of Finwe‘s prehistoric aerial captor and pillages coasts up and down the globe for information. The loss of Finwe is felt by everyone, but affects Nathaniel Grizzlejaw most of all. Beside himself at the parting of his platonic friend, he mopes about the ship aimlessly for days on end, descending into dementia. One day he jumps overboard, and upon his retrieval from the ocean by Rouba Juba, the crew realizes that the quartermaster has already swallowed too many big gulps of seawater. Grizzlejaw withers into the fetal position, a soulless, desiccated husk of his former self.

With the loss of Finwe and Grizzlejaw, along with the late Victor Crow and Elvil Rumsik, only five travellers remain: Wolfbeard O’Brady, Rouba Juba, Castle, Smithy Crow and Riven Rahl. They no longer wish to continue living in the modern world, a cold and bitter place, preferring to return to their own time of endless bounty and exploration—1740. Armed with the late Crow’s discovery of temporal rifts in the Atlantic, the crew embarks for the Sargasso Sea.

Whilst sailing through mirrored waters, an iceberg comes from out of nowhere and tears a gash in Chromatica’s hull. The vessel takes on water faster than Wolfbeard takes to liquor, and the group scurries on to the berg just as Chromatica dips beneath the waves. Weeks pass with no spare luck as the iceberg drifts aimlessly through the sea; this angers Castle. “There’s no women; therefore, there’s no whiskey.” Wolfbeard, hungry and perturbed, notices what he thinks to be patches of grass growing on the berg, but upon closer inspection, finds a pair of beards peeking through the ice! Infuriated, he grabs both and pulls with all his might, breaking through the ice and removing two frozen Viking twins!

The group argues about what to do with its hairy discovery, and decides to let the twins thaw before eating them. As Wolfbeard gnaws on an arm, the Viking shouts, “Jeg skal kutte av deg hodet og drite ned halsen din!” which they mistranslate as “Hello, please stop eating me.” After a lengthy conversation, the crew agrees to help the Vikings return to their own time, 1,000 years prior, as they’ve been trapped under ice ever since. Despite the twins’ best efforts to teach The Dread Crew their unpronounceable Viking names, they are christened Stark and Deckard Cordwain. The crew exhumes more relics of old from the iceberg, including a wooly mammoth, whose fur they craft into manly and archaic sails. As they enter the mysterious realm of the Sargasso, the skies blacken and the waves grow fierce, giving way to the maelstrom of Time.

Soon enough, the crew emerges in a different era, and stops into America for a warm cup of coffee. But it is not their time at all; they find themselves in 1776, amidst a war between the Colonies and Britain! After hassling a local, they find the man in charge of this bedlam—Colonel George Washington. He is worried about the future of the Colonies, but The Dread Crew provides Washington with invaluable advice that eventually turns the tide against the British and ends the War for Independence. A most humbled Washington, now indebted to our heroes, offers to tag along and aid them in their return to 1740, and the travelers make their way to the Sargasso once again.

Upon completing their temporal journey, the crew notices airplanes flying overhead, and enters into a very decimated Germany. “What century is this?” asks Washington. The crew regales the general with stories of a certain madman (who shan’t be named) and his evil plot for world domination. “I am outraged,” says Washington, “Where is this man?” The crew slaughters an entire convoy of Nazis, leaving all but one to reveal the führer’s whereabouts—a bunker hideout. The Dread Crew marches on, storming the cowardly man’s shelterwith the American general leading the way.Washington kicks down the steel-reinforced door, and, standing proud and tall with a spear-mounted American flag in hand, proclaims, “In the name of the United States of America, I shall lay my vengeance upon thee!” The genocidal Chaplin lookalike screams as Washington impales him through his blackened heart, spewing highly acidic Nazi-blood everywhere and melting a few of George’s teeth (later to be replaced by wooden teeth carved by the crew’s carpenter, Rouba Juba). The group ravishes the führer’s wife and sets fire to them both, escaping in a stolen airship.

The next morning, as our heroes are making their way back to the Sargasso, Washington informs the crew that he feels as though he is disregarding his call of duty, and would like to return to his time. Riven, preoccupied with a human female, confuses Washington by saying, “I already went,” and Washington quickly jumps overboard into the maelstrom below, in hopes of travelling back in time to co-found his country. Too busy with his newfound love of hot German girls to notice what happened, Riven rolls back over, bumping into the control panel and accidentally sending the Airship of Oddwood into a nose dive, straight into the wrong wormhole. This mishap sends the crew back to the future, and due to the inconsistent nature of time travel, they become trapped in the modern world again.

Upon their not-so-triumphant return, the group decides that the only logical course of action is to unleash a collection of songs that stir fear into the hearts of men and lust into the hearts of women...an aural masterpiece composed entirely of testosterone, hard liquor, and Heavy Mahogany, channelling the raw energy and might of the Gods themselves. Women cannot help but throw themselves onto the group as they are magnetically drawn to exuberant facial hair and manliness. With their soaring fame, sheer glory and limitless concubines, The Dread Crew sets forth on further quests to pillage and plunder the modern world, thus immortalizing themselves forever, musically and historically through Heavy Mahogany!!

The Dread Crew of Oddwood recommends:

Bandcamp Daily  your guide to the world of Bandcamp